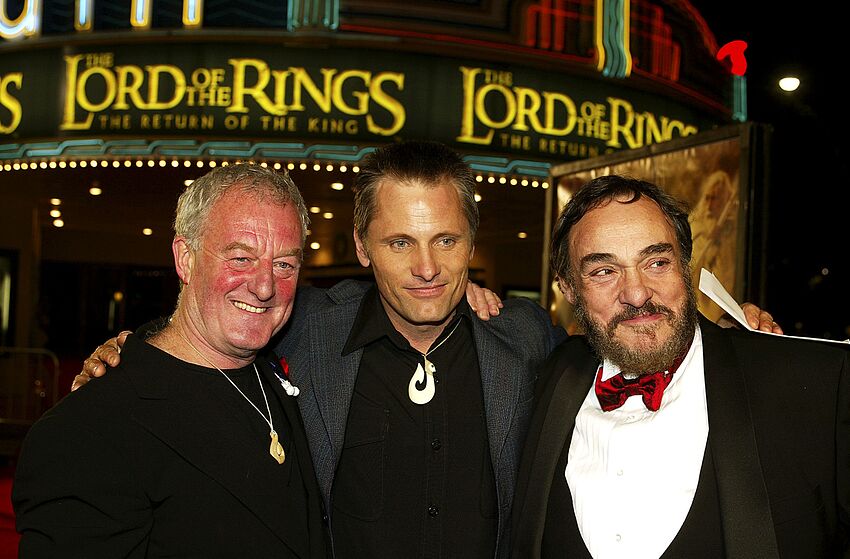 LOS ANGELES - DECEMBER 3: Actors (from left to right) Bernard Hill, John Rhys-Davies and Viggo Mortensen pose at the premiere of "The Lord of the Rings: The Return of the King" held on December 3, 2003 at the Village Theater, in Los Angeles, California. (Photo by Kevin Winter/Getty Images)

Amazon is extremely secretive about Lord of the Rings, but there’s already some excellent news. The show has landed a very early Season 2 renewal.

Early renewals aren’t all that uncommon when it comes to Amazon Originals. We just have to look at Jack Ryan, The Boys, and Carnival Row that all recently landed early renewals. However, there’s something extremely special about Lord of the Rings‘ early Season 2 renewal.

The aforementioned shows have one thing in common: there was some sort of footage out before the renewals came in. Jack Ryan‘s second season renewal came after the success of the promo during the Super Bowl. The Boys and Carnival Row renewals came just shortly before their releases, with fans talking about the series due to promos and new buzz.

Lord of the Rings has absolutely nothing out just yet. We don’t even know that much, except that the first season is going to be 20 episodes long, the longest of all Amazon Originals. The support for the show is already there, though. Fans of the novels and the original movies are all excited to see the next part of the story—the prequel to the stories.

That’s what makes this renewal so special. Deadline reports that filming of the first two episodes is only just underway. Directed by J.A. Bayona, there will be a hiatus in the filming, allowing the showrunners time to look over the footage and make sure the series is going in the direction they wanted.

Don’t worry about the break. This is common for shows that get straight-to-series orders like Lord of the Rings received, just to ensure everything is on track. There’s no point getting to Episode 10 to realize that something in Episode 2 wasn’t right to continue the story!

However, one thing that the early renewal means is that once filming is back in order, the second season can be planned out. The production can move straight onto filming the second season, and there won’t be a huge hiatus (The Man in the High Castle, we’re looking at you!) between the first and second seasons.

What do you think of Amazon renewing Lord of the Rings already? What do you hope to see in the first season? Share your thoughts in the comments below.

Lord of the Rings still has no release date but is likely in 2021.