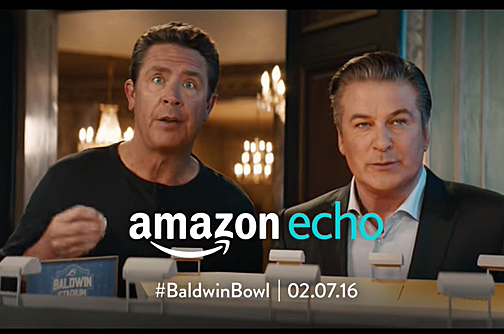 Amazon has released another teaser trailer for their upcoming Super Bowl commercial, according to an Amazon PR representative.

For those who don’t know, Amazon will unveil their first Super Bowl commercial during Super Bowl 50 when the Denver Broncos face off against the Carolina Panthers on Sunday, February 7, 2016.

The commercial will star Alec Baldwin, Dan Marino, and possibly more big stars, and it will advertise Amazon’s new personal assistant, the Amazon Echo with Alexa.

Over the last week, Amazon released two teasers for the upcoming Super Bowl ad. The third ad was released on Monday. The teasers only make sense when watched in sequence, so if you haven’t seen the first two teasers, you might want to do that before watching the third teaser.

I honestly don’t know what to expect from the Amazon ad, but I’m really hoping snack stadium is everything it sounds like it could be!

While you wait to watch the full commercial to air during Super Bowl 50, why don’t you want a new TV series on Amazon Prime Video?

Check out our ranking of the 50 Best TV Shows on Amazon Prime Video for all the great TV picks, like The Wire, The Sopranos, Mozart in the Jungle, Mad Dogs, The Man in the High Castle, Transparent, and more!